The twin fin, like the thruster or quad, describes a certain type of fin setup rather than a surfboard-type. However, like the other prominent fin setups described here, the twin fin certainly deserves a page of its own.

If you’re new to twin fins, you’re in for a treat. It’s a type of fin setup that can make surfing feel brand new again if you’ve never ridden one before.

While you’ll mostly find twin setups on fish surfboards, they typically work well on any type of board with a wide tail.

Characteristics of a Twin Fin

The bottom line: Twin fins are fast and loose.

With no fins in the middle of the board, water flows straight out the back, unimpeded – eliminating drag that you’d find with a single fin or a thruster set up. This makes for a super fast board. If you’re not used to it, maybe even too fast until you learn how to control and harness the speed.

The speed makes the twin a great set up for both getting past fast sections and through mushy parts of a wave.

Twins are also highly maneuverable. They’re easy to pivot and easy to turn – you might describe them as skatey or glidey. Certain types of twin fins can be difficult to maintain control when digging into a big turn. However, by experimenting with different fin shapes and sizes in your twin, you can usually find a set up that’s going to do exactly what you want it to.

Twin fins work well in a board with a relatively wider tail – and they feel magic on a classic fish.

Twin fins can be a good choice in a variety of conditions. While they certainly excel in small wave, twins can hold their own in bigger, more powerful surf too.

Experimenting with different twin setups in different surf will likely lead you to some pretty enjoyable epiphanies in your own surfing.

History of the Twin Fin

Experimentation with twin fins likely began after the introduction of the fin itself.

By the 1960s, twin fins were become much more popular. By the late 60s, twins were commonly found on knee boards. Most noteably – Steve Lis’s Fish design.

By the 1970s, surfboard manufacturers were shaping all sorts of twin fins and twins were becoming common in competition – and performing extremely well for certain competitors, like Mark Richards.

With the emergence of the thruster in the 80s, twin fins started to fade on the competitive scene. 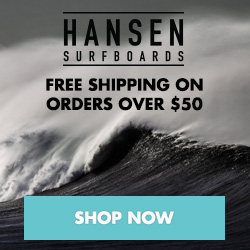