It was only a matter of time before someone started throwing props and motors on surfboards.

And now, you can get one too.

These electric surf fins are designed to fit right into most standard fin boxes to give you an extra boost.

But, will it make you a better surfer?

Will you catch more waves?

Or will you be branded as a kook for life when you motor out to your local break?

Read on to find out.

When you click a link and make a purchase, Wave Arcade may earn an affiliate commission. This comes at no extra cost to you and helps us to continue bringing you great content. Thanks for your support!

Will an electric fin work on your surfboard or SUP?

The majority of electric fins available are designed to attach directly into your fin box.

Most electric fins fin into a standard longboard or SUP center fin box.

Others, like the Boost Fins (see below), have been designed to fit:

Most electric fins, with the exception of the Boost Fin, have external battery boxes and remotes that are going to make them pretty impractical if you want to use it on your surfboard to actually surf a wave.

Electric fins and their propellers are heavy, bulky, and far less hydrodynamic than a typical surf fin.

Any speed boost you get while paddling is going to be negated by the drag and lack of responsiveness and flex when you go to turn and surf the wave.

How do electric surf fins work?

Electric surfboard fins are small propellers powered by a small motor that attach to the bottom of your board.

They typically feature a remote control with a variety of speed settings. 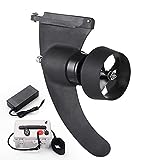 The JS Powered Electric Fin by HiSun is one that’s been available for a while now.

Depending on the speed setting you run with, the battery will last anywhere from about 2 1/2 to 10 hours on a full charge.

A unit like this doesn’t really make sense on a surfboard for surfing.

The battery box will need to go towards the tail, you’ll have a remote to hold, and you’ve got this big fin creating a whole bunch of drag when you’re trying to turn.

On a stand up paddle board on flat water or open ocean, this motorized fin makes more sense and can be a blast. 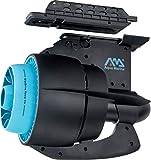 This is another one that makes more sense on a SUP or a kayak rather than a surfboard.

The Boost Surf fin is one that stands out from the pack in that it looks more like a fin, removes the external battery box, and cuts down on some of the bulk.

While this fin is able to fit more practically to a wider range of surfboards, including shortboards and boards you’d actually be surfing waves with, it’s still something that’s more of a novelty.

Despite cutting down on the bulk of some of the other electric fins, this thing is still overly huge for most surfboards.

On a SUP or when you want to mess around on some flat water, this could be a fun thing.

Will an electric surf fin make you a better surfer?

The drag, weight, and bulk created by these fins just doesn’t make sense from surfing.

If you’re looking for something to have some fun on your SUP or in flat water, these may fit the bill.

If you want to surf better and catch more waves, however, you’re going to need to surf more – with normal fins.

If you’re looking to save some money on surfboard fins, you’ve got 2 main options:…

Twin fin surfboards can feature either fins or keels. While the term “keel fin” is…

If you’re interested in fin experimentation, the 5-fin set up is for you. The 5-fin…